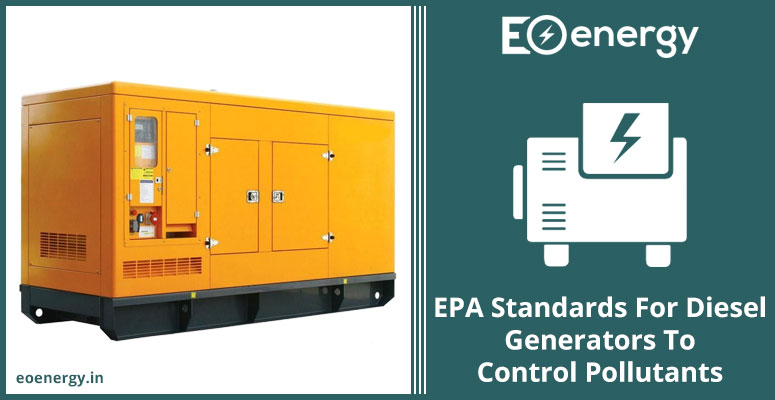 The U.S. Government start taking some useful steps to control the spreading of environment atmosphere pollutants. After 1950, the Environmental Protection Agency or EPA has improvised emission standards for diesel generators to control pollutants which prepares plans to improve and implement air quality by decreasing harmful and injurious emissions.

Diesel exhaust is one of the most harmful and injurious emissions, for which the proper regulations can have a good impact. It can be beneficial for on-road and off-road vehicles and engines, combining non-road diesel engines and some stationary diesel engine generator sets. This may sound difficult for the industry but it can lead to engine development that can decreases emissions and boosts power performance.

To run the process smoothly and sharply, an implementation system was designed to enable all entrepreneurs, combining scientists, engine product manufacturers, and others to invent knowledge and new technologies. It tends to face these regulatory and daily basis goals and tasks. The improvement system is really more accurately and correctly defined as a tier system that put in spot to accommodate the process.

The EPA emission standards for diesel generators as follows

EPA standards for diesel generators include four kinds of tiers to decrease harmful and injurious gases into our environment. Single-tier was developed off the other to create compliance more controllable and has a certain standard with respect to harmful and injurious emissions and presents a cap at which point emission must be as limited. This is the professional progress over the years in accordance with the tier level.

The purpose and primary emissions to decrease include:-

How do Tier Level regarding generators?

1998 off-road engine regulations were structured as a 3 tiered progression, with every single tier covering a phase-in over several years. Every each single-tier combines a set of horsepower emissions rating.  Diesel engines, not the initial mission when the EPA standards for diesel generators were first published and implemented. But they are very much the subject of these regulations now on time. Under the phase of the emission reductions some overview of these three tiers and how they regard generators.

These tier standards were published in 1990 but it authorized the federal government to issue permits to stationary power sources. These emission standards govern all-new off-road diesel engines of any horsepower category except locomotives and marine vessels.

The implementation for diesel engines and generators didn’t start until 1996 and are developed with the compliance by 2005.  Tier 1 standards were meant to focus on diesel elements and equipment under 37 KW (50hp) with the phase-in period fro 1996-2000.

The chart table below has described all characteristics included:

The phase was appreciated in 1998-99. It added more stringent regulations and addressed NOx, the generic term & conditions for the mono-nitrogen oxides NOx2 and NO. It controls unburned hydrocarbons, carbon monoxide, and individual matter emissions. Tier 2 covered engines of all sizes that were developed between 2001-2005.

Tier 3 standards were published shortly thereafter. This phase was implemented between 2006 and 2008. It restricted admitted emissions for engines with 20 to 750hp.  These phases, nevertheless, didn’t start until 2001 with all engines to be in compliance by 2008. These 2 levels want engines to be more knowledgeable and advanced to meet the criteria set in the regulations.

The below chart table identifies Tier 2 and Tier 3 standards regarding diesel engine horsepower and injurious, harmful gases to be limited.

Tier 4 is where the place we are at today and its objective is easy and simple. All diesel generator sets are or should be at on level 4 tier. Of course, this is the most powerful and strict of all rules & regulations. If you are environmentally aware, then this level may face much of your expectations. Here, the most full advanced technologies are utilized to receive the biggest reduction in emissions available at current times.

The technologies utilized for tier 4 level performance are those in close zero emission levels. This is the final ruling that signed on 11 May 2004 and phased in late time from 2008-2015. The new standards want a 90% deduction of MP and NOx Emissions.

The on targets emission standards are to be received through new managed technologies is similar to the 2007-2010 requirements for high and big engines, which combine advanced later treatment of exhaust gas. Carbon monoxide standards, however, remain relatively similar to those who established in tiers 2,3.

The below chart tables present a conclusion of these emissions standards:-

With relating to the above table, nevertheless, there is a lot of divergences. These divergences are a report of multiple factors, like credits claimed by the product manufacturer, certification as a choice NOx limit, or participation with optional PM standards.

We checked that the tier-system occurs to burden product manufacturers and users of diesel engines and generators but it does offer advantages too. Some of these advantages include:-

In total, your tier 4 generators advantage you from all the corner like:-

To make it simple in compliance beside Tier 4, it is being regulated in two kinds which describe emission caps based upon engine horsepower. The tier 4 interim (Tier4i) primarily focuses on the reduction of hydrocarbons (HC), carbon monoxide (CO), and particulate matter (PM). The second kind, called Tier 4 final (Tier4f), will focus on the reduction of NOx.

Tier 4i is effective from 2011-2012, while tier 4f starts in 2013and continues through 2015. Because of their lower emissions potential, EPA enables the emergency generators defined above to add continue operating at pre-tier 4 standards for the foreseeable future time.

Additionally, EPA does not limit the hours of operation for emergency generators under emergency conditions, they do limit the non-emergency operation of such generators to keep emissions probably low. For example, maintenance and exercise timings must be to 1000 hours a year. Of these, above to the 50 hours, a year can be used for general non-emergency operations, but not for summit shaving or for earning income by selling power to other third parties.

The EPA differentiates between generators utilized for emergency power and those used in non-emergency apps because of the running times, and therefore finds emission in every single application departs to be vastly different. Emergency generators are supposed to run only a certain number of hours per year in response to power outages and for daily routine maintenance.

Because of the number of hours, time can be effectively estimated. EPA acknowledges the probability of emission of an emergency power generator and finds it significantly less than the unit’s theoretical maximum emissions.

Its typical operating script is as follows:-

Utilizing this definition as a reference purpose, a non-emergency generator is- simply put- one that is not being used exclusively and worldwide for emergency power. It covers a number of diesel generator applications:-

How do diesel engine companies face the standards established by the EPA emission tier system?

What can arrive after Tier 4?

Now that we are all at tier 4, what arrives next? Tier 5 is the natural response, but the EPA has done small to move towards it. That said, most generators product manufacturers do not operate and work on the market of the United States but Europe is well on its phasing the regulations that could be considered as Tier 5 Standards.

Stage 5 in Europe, nevertheless, is comparable to its stage 4 which is so big and not expected to change highly but it is expected that companies tend to move forward with emission reductions and efficient products which are made possible through fresh and more advanced technologies. Because of the equalities between Tier 4 or 5 in Europe, product manufacturers do not have to worry about compliance so long as in compliance with Tier 4.

In this blog, we have tried our best to provide you with all EPA emission standards for diesel generators to control pollutants. The types of tiers are also explained through chart tables. Just keep your diesel generator emits within the standard norms and regularly updated with the latest news. This is how you can take a giant step to reduce the pollutants that can be increased with our electricity demand.

With the environment in mind, we conclude with the hope that this tier emissions rating material for diesel generators will prove to be helpful for you.