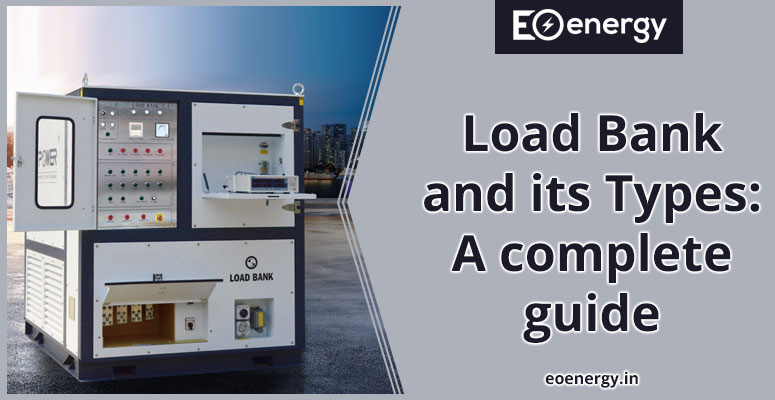 Load bank is an important asset for any organization because every organization needs a backup when power outage for the proper running of equipment. Specifically, a load bank can create a load similar to the daily use and test a power source for running efficiency. The power source will supply the power, but the load bank uses this energy to protect and support power sources. Moreover, it also helps in the testing method.

Load Bank is used at the time of emergency. Permanent or portable backup generator can give you peace of mind knowing you have a reliable source of power to fall back on.

Think about it what would happen if the backup does not work?

It would create a big problem for production costs, the cost of human lives when a standby generator fails to perform during times of emergencies. Most of the operations and facilities are designed to perform at the time of emergency. Load banks can either be permanently installed and connected to a power source and portable versions would be used for testing power sources such as standby generators and batteries.

The Load bank produced an electrical load. The load bank serves the power sources. The Load bank used its energy output to test, support, or protect the power source. Generator load bank testing refers to a process to assess a generator’s capabilities, Verifying all the Genset components working well in different loads…

As it is, standby and emergency generators are not always run regularly, so it is important to run tests to make sure they can run your operations or facility at their full kilowatt ratings.

Available in different sizes and configurations, load banks measure commercial loads, these loads consist of a combination of motors, heating, transformers, and lighting.
Depending upon your purpose you may option of permanent Load bank or a rental Load bank each bank Load has its advantages and disadvantages. There are four types of Load banks.

Resistive Load Bank is used a lot. It converts electrical energy into heat using a power resistor and removes the heat by using water and air. This load bank generates 100% capacity. This is a method for measuring loads: electrical energy is converted to heat via resistors, and the heat dissipates via air or water.

The inductive load bank can test only up to 75% of full power testing. While capacitive load bank testing performs the same except it creates leading power factor loads, which copy some electronic and non-linear loads. Reactive load bank testing is used to analysis engine generator. In which we measure how efficiently the load (current) is being converted into useful work output.

The Reactive load charges and releases energy. It is mostly used to testing of motor-driven devices and transformers and capacitors. Reactive load testing conduct in telecommunications, solar, manufacturing and mining applications.

Disadvantages of combined Resistive and Reactive

The combined Resistive and Reactive load complex system consisting of many different parts and due to any failure, the entire system will not work. In the testing time, we need to ensure the entire system functions as required.
Mostly facility manager skips the testing because of complexity and the lack of time and cost. They use a resistive load to check the engine. The testing of the resistive load will not assure you during the emergency power supply shortage.

DC Programmable loads provide some additional test capabilities that can detect oscillations within a fraction of a second. It immediately stabilize the load profile and stops the effects of oscillation and current spikes. Moreover, A programmable load can protect against damage to your mission-critical electronics.

As you can see, load bank testing is necessary — and even required — but there are a lot of options to consider. At Worldwide Power Products, we offer load banks to buy and rent from our base in Houston, TX. We can help you identify what will work best for your operational needs and emergency planning. We intend to keep the power on, even in times of emergencies.

They are usually of four types which are the following:-

1. Benchtop
The benchtop load is very cheap but it has only limited range and accuracy.
2. Slot
Slot is used to measure the set of variables and it is also similar to the benchtop.
3. Modular
A computer has chassis and is designed for applications with changing load configurations.
4. System
System load designed for continuous work and It includes integral transient generator. As compared to other types it is very expensive and comes with new features.

We are now going to discuss the application of load banks:

They can be used for several purposes which include:

In this type of testing method, the load bank is generally used to test

When the generator is installed in a test cell within the factory, a test engineer uses a load bank to apply discrete, selectable electrical loads to the generator and measure response stability and endurance.

During this process, the test engineer adjusts the generator performance and finally ensures that it meets the intended product specifications and tolerances.

Manufacturers of small gas engines also use this to test newly built engines under various mechanical loads. This can be done by connecting the engine to the load bank through a device called a dynamometer. Again, engine performance is monitored. If necessary, adjustments are made to ensure the product is within specific specifications.

Generators installed in the field should be periodically tested and practiced.by doing we can ensure the working of the generator when a power outage occurs. Service groups use load banks to implement a load that mimics the load of a generator facility. Any problems with the generator can be identified and corrected in non-critical environments.

You can easily install these devices in diesel-driven generator sets to apply the additional load required to ensure fuel consumption in the engine as a whole in the combustion process. If the diesel engine does not operate under sufficient load, the incompatible fuel will assemble into the engine’s exhaust stack and form an oily coating.

Load banks are used as tools for buyers to perform and users of a new generator set so that the unit meets the performance specifications outlined in the purchase contract.

There are two different modes of operating load banks which are as follows:

Automatic load leveling/load regulation to maintain a preset load on the generator by total load and automatic addition or subtraction of the load bank component.

So, far here in this article, we have discovered that generator load bank testing is very important as it will help to keep your backup source of power. The backup source of the power remains reliable. It also helps to provides maximum performance when needed.

The load bank testing can reduce system flexibility, destroy the battery or in extreme cases put the connected load at risk. But it is also very important that these tests should be done by experienced and skilled professionals.

Therefore, if you really want to do increase the self-life of generators, then you should really opt for these tests and measurements.

So,  If you have any doubts related to this topic, then please don’t hesitate to comment in the comment box.