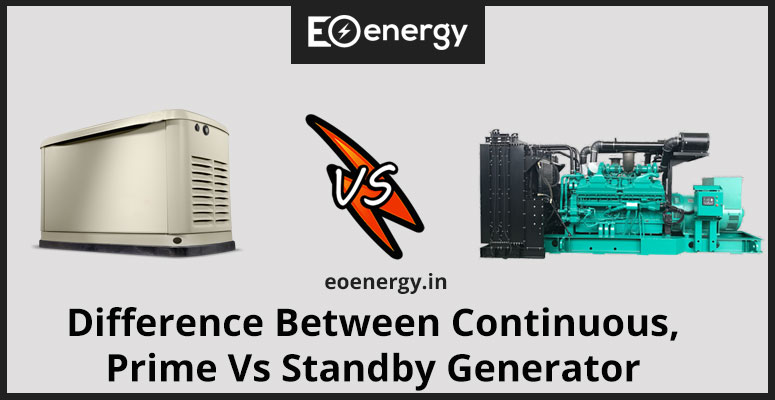 Buying an electrical generator takes a lot of research, a generator will provide you with power when you need it. So the one most important part of that research is power rating. The power rating is fixed by the manufacturer and that will help consumers to know what kinds of applications suitable for the generator and how much it can be used. After reading this blog you will be able to differentiate between Continuous, Prime Vs Standby Generator.

However, a reliable generator is one of the most important pieces of equipment that commercial business, health care organization or any organization that serves a large number of people can purchase. Because a loss of power for a short period can badly impact the organization’s ability to function.

But yet, when selecting a Continuous, Prime Vs Standby Generators for any application, there are also so many factors to think about. It’s essential to know this to ensure you buy a generator, which is capable of providing proper power for your needs within the efficiency as well.

Before purchasing any generator for an organization, it’s good to have at least a basic understanding of its power rating.

What are Power Rating and types of generators?

There are three types of power generators, Continuous, Prime vs Standby. The power rating of the generator by which they differentiate will also help you to avoid overpaying for capacity/capabilities than you need.

Ratings such as total power output, load factors, running time and emissions regulations must be defined for every installation. While all manufacturers comply with industry basic standards. Some rate their generator sets in a way that requires careful consideration. So let’s explain the types of generators with power ratings.

These types of generators are work, as you can guess by the name, Continuously. They supply a constant 100% load capacity for an unlimited number of hours each year. You will find these generators at remote sites such as Mining, agriculture and military operations.

Continuous power supply generator refers to electric-power that must be continually supplied throughout a 24 hour day. On the other side prime vs standby generators, where prime elect-power generator should be applied in applications where the user doesn’t buy power from a public sector. And standby generators used in the home for backup., An example continuous power would be a desolate city in the remote parts of a country that is not connected to an available power grid. Islands in the Pacific Ocean are the best example of where power generators are used to provide Continuous power for the residents of an island.

These generators are the most important tools for remote sites because they provide power at 100 % load capacity on an ongoing basis. They are often used in military, mining, and agriculture, but can work for a variety of other applications as deemed beneficial.

Prime power generator should be used in applications where the user doesn’t purchase power from a public sector. In this Prime power rating the maximum power accessible at the variable load for an infinite number of hours per year in a variable load setting.

Prime gen-set also provides ongoing power, but not like Continuous generators that develop for limited load fluctuation, Prime generators can accommodate varying load on an unlimited basis throughout the year.

These types of gen-set supplies power for a temporary purpose, as well as applications that are typically remote from utility facilities, such as remote mining, wilderness outposts, petroleum exploration operations.

Indefinite running time means can be smoothly and safely run at maximum power and variable load for an unlimited period. However, there also may be some restrictions load based on how many hours each year the unit needs to be run.

Limited running time means the unit can provide maximum for a limited number of hours and variable loads. These types of generators are just limited to 750 hours of run-time per year. But if needs are greater than 750 hours, so a continuous power rated generator is the best choice.

The end-user should be aware that the constant high load use will reduce the life of any engine.

Limited Prime power is basically for circumstances where power outages are expected such as planned utility power reduction.

Generator set rated for Limited Running Time Prime is designed for supplying electric electric-power to use as part of a financial arrangement. Applications include Load management, Interruptible rate, Peak saving, and Load curtailment.

Prime power generator uses go beyond the list above.

To operate continuously at high performance, the Prime rating generator should be on a regular maintenance schedule.

Installing a Prime Power Generator is a process that should handle by a certified installer that specializes in prime power or industrial applications.

One of the most important aspects of the installation process is being aware of standards and local codes, especially air quality compliance boards.

Ultimately, your Prime Power Generator fuel choice should reflect the needs of your application. For example, if someone in the fracking business will have access to cheap natural gas. On the other hand, a military base far away from a gas line will need to choose diesel.

Ultimately, your Prime Power Generator fuel choice should reflect the needs of your application. For example, if someone in the fracking business will have access to cheap natural gas. On the other hand, a military base far away from a gas line will need to choose diesel.

Considering the application, along with the maintenance costs and current fuel prices, will help you make the right choice.

In some cases, prime power generators can be uses alongside utility power to benefit everyone involves.

For example, the utility provider will supply a user with power up to a certain threshold. Once that threshold reaches the user’s generator will provide any supplemental power to make up the difference.

These are the most common generators. They use as backup and emergency generators. Most of the houses, schools, hospitals and some other places won’t need to use Standby Generators unless electrical power is unavailable for some reason.

The most important thing to understand about these generators is that they design for work for a limited period as a standalone machine.

With these generators, there is no overload capability to build into the unit. The primary application of the Standby generator just provides emergency power for a limited time during a power cut. But if you consider a continuous generator they have baseload, so we differentiate Prime Vs Standby Generator and continuous generator.

The rating for the Standby engine should size for a maximum of 80% average load factor and roughly 200hours per year.

What Standby Generator Should I Get?

There are three types of Standby Generator

The type you should buy will depend on the load requirement of your application. Let’s take a look at every type in more detail.

Regarded for their low price tag, serviceability, and ease of installation. The Standby Generator is best for small to medium-sized houses. If you manage your loads wisely, you’ll barely notice when the electric grid goes down.

The term “Whole House” really depends on the size of your home. If you are looking for an ultimate power backup the Whole House Generator is for you.

This type of generator offers many benefits. They feature larger, more powerful engines for longer run time without maintenance.

The only kind of generators that can match the strength for more commercial applications. It’s a liquid-cooled generator capable of producing 3 phase power with long run time. So having a backup generator is can be profitable and unprofitable for any organization.

If your company has ever experienced a power cut, no matter how brief, then you know how quickly things go worse.

As the name suggests already, air-cooled engines use cooler outside air to keep it from overheating. These types of engines exist on Portable generators, lawnmowers, and most home standby generators up to 22 kilowatts.

Liquid-cooled engines are just similar to automobile engines in that they use a liquid coolant to circulate inside the engine. And dissipate heat through a radiator. As a result, liquid-cooled generators are more powerful, durable, and capable of running for extended periods. Surprisingly quiet for their size, liquid-cooling generators are able of producing electricity up to 150 kilowatts and use mostly for commercial and large whole-house applications.

So as per the above information power generator is a device for converting some of the energy- for example, chemical energy, mechanical energy, heat into electrical energy. The word Power Generator is a group term. But in a broad sense, the term power generator implements on such devices as electrochemical generators, galvanic cells, thermionic converters, and solar batteries.
Select the best according to your needs.

So as per the conclusion of this blog, standby power generators are most often use in emergencies, such as during a power cut. It is ideal for applications that have another reliable continuous power source like Power Generator. It’s highly recommended usage is most often only for the duration of a power outage. Prime Power Generator as having an unlimited run time and that will use as a primary power source and not just for standby or backup power.

While a Prime vs standby generator can provide power in a situation. Where there is no benefit source as is usually the case in industrial applications like oil & gas or mining operations located in remote areas where the grid is not accessible.

The main difference between a prime vs continuous rating is that. Prime power gen-sets are set to have maximum power available at a variable load for an unlimited number of hours and they include a 10% or so overload capability for short durations.

I hope this blog will help you to find the difference and selection between Continuous and Prime vs Standby Power Generator. Thank you.