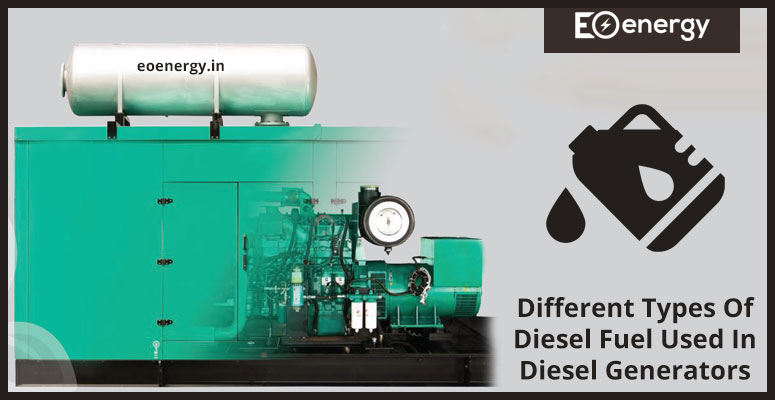 Diesel is one of the most popular fuels used in any kind of generators whether it is a standby or a portable generator. Not only it is the most common fuel for diesel generators but it is also a major fuel source for all automotive. In fact, it can be seen as a better alternative fuel source as compared to other sources like petrol, kerosene oil, etc.

Nowadays most of the generators use this fuel instead of using any other fuel. You can also use petrol or any other fuel in the generators but they are very costly and not that effective. By using diesel you can obtain the maximum results. There are different types of diesel fuel use in diesel generators.

What is Diesel Generator?

The diesel generator is a type of machine which is used to generate electrical energy using diesel fuel. Both electric generators and diesel engines form a combination. The combination of these two gives the form of an engine-generator. A diesel compression-ignition engine is typically designed to run on diesel fuel, but some variants are optimized for other liquid fuels or natural gas.

Diesel generators can be used in case of a power outage or in places where there is no connection to the power grid. Let us assume that you have understood the features of the diesel generator very well. Now we will talk about diesel, its uses, and its types.

What is Diesel Fuel?

The diesel is named after the German inventor “Rudolf Diesel”. Who took a patent in 1892 for a diesel engine. Diesel is a type of vertical fuel, which is made in one phase (200–350 C) by cooling petroleum in several stages.

It is a common fuel for vehicles, machines, generators, etc. It is used in heavy vehicles and automatic sweeteners engines by blowing in compressed air. Diesel has the same chemical energy per liter of gasoline. The engines powered by it are high in nitrogen oxide and soot particles, due to which pollution is difficult to control. Therefore, the use of oil made from organic materials called biodiesel has begun in its place.

The term diesel is also used for this displaced oil. Conversely, many countries are taxed more with the aim of reducing its use. Diesel is usually found in a fluid form with several ranges. The density of this fluid is 820 grams per liter, that is, about 820 kg / m 3 and evaporates at 140–250 degrees centigrade.

It is composed of a mixture of several ranges, including open rings and vertical rings made of carbon atoms of aromatic round links. Its average chemical formula is considered C12H23. It has 43.18 MW per liter of energy, which is slightly higher than petrol but both have the same energy per kg.

The major uses of diesel fuel are:-

Now we are going to discuss the different types of diesel fuel used in the diesel generators:

Although thousands of conventional diesel fuel-driven vehicles are still on the road, such vehicles are ordered to be discontinued soon. If such people are found walking on the road again, then strict action will be taken by the government against such people.

Diesel fuel causes air pollution. When used, a lot of poisonous gas comes out. Which is not right for the Earth’s environment. Because of this, for example, poisonous gases, propane, nitrogen, or other poisonous gases appear. For this reason, diesel is divided into various parts based on its quality. Below, we will know one by one how many parts it is divided into.

Based on this, diesel fuel is divided into two parts. Below we will understand all the parts one by one in detail.

These different classes combine with any diesel engine, meaning that you can use one of these in winter and during summer problems. The ability to switch and / or mix is ​​another advantage of diesel because grade and mixed versions offer different benefits.

In fact, each class provides another benefit to provide. Knowing what the latter is and aligning it with your operations will be important for performance.

Diesel Fuel class # 1 products have lower energy components and are more expensive than their main counterpart, # 2-grade products. However, this is rarely a problem in cold weather conditions, which is completely opposite to the # 2 grade.

This is because paraffin (a type of wax) is not present in the chemical mixture. The absence of this chemical allows it to remain in liquid form during the winter months.

# 1 fuel have also has drawbacks which are as follows:

Diesel Fuel Grade # 2 (D2) diesel fuel is readily available at most gas stations around the world. This is because it holds the highest amount of energy components and lubricant properties. As well as it provides the best fuel performance that is available in the market today. Most scientists state that the # 2-grade diesel fuel injection pumps, seals and secures other important engine parts.

In general, # 2 diesel is less expensive than # 1. This is because it assumes that the same depth of refinement is necessary to sell products. # 2 Diesel has a tendency to convert part of the gel into a thicker gel when the temperature is low. This often causes a difficult onset and other complications during the winter.

Winterized diesel fuel is a combination of # 1 and # 2 fuel. # 1-grade diesel fuel has a high concentration. These fuels are basically useful for the winters when using # 2 grade becomes very cold.

The combination of both grades of fuel should have sufficient energy components and lubricating properties to reduce the possibility of chemical mixing in cold temperatures. Typically, fuel economy decreases slightly during the winter months because its demand is lower than at other times of the year.

The “winterized” mixed option offers benefits from both grades, making it a workable and best option for generally cold climates and particularly cold. The benefits of mixed diesel fuel include:

The use of # 1-grade diesel fuel in winter should not be a cause for immediate concern. However, long use of grade #2 fuel may reduce engine life span over a long period of time. #1 and # 2-grade fuels can be mixed at the same time. This means you don’t have to worry if #1 grade is only available during the winter months.

Diesel fuel is primarily liquid fuel for diesel engines. It is useful for road vehicles, watercraft, rail vehicles, and generators. Diesel fuel consists of an almost hydrocarbon mixture. There are 8 to 21 carbon atoms per molecule obtained by the distillation of crude oil. Additionally, it contains additives.

Typically viscosity is an important parameter for diesel fuel. Fuel that is too viscous can cause damage to the fuel pump (such as cams and followers wear) due to high pressure. Very low viscosity may be the reason for lack of lubrication. Viscosity also affects fuel delivery rate and fuel atomization during injection.

Diesel # 1 has a low viscosity, which means it is less thick and flows easily. Therefore diesel # 1 is more effective in winter. Diesel # 2 has a high viscosity, so it is less efficient in low temperatures and is better for use during hot weather. But winters are generally decreasing, and as they do, mixing the two grades is often an option to reap the benefits of both grades # 1 and # 2.

Uses of Diesel fuel In a Generators

So, here in this article we have discussed about how diesel fuel can be useful for our generators as compared to other fuels. By using this type of fuel in our machines we can obtain the maximum benefits at a very cheap and effective cost.

In fact, we can also say that “Diesel fuel keeps the world economy moving forward”. This can be proven by the fact that by using it in our automobiles you can easily transport goods around the world, easily generate electricity, increased efficiency on the farms, etc.

There are two different types of diesel fuels (i.e. Grade #1 and Grade #2) used in our diesel generators to generate electricity. Both are really useful but if you really want to obtain the maximum output then you should Grade #2 diesel fuel as it is readily available and cost-effective.

So, we really hope that you really like the article and if you have any suggestion then don’t forget to mention in the comment box.