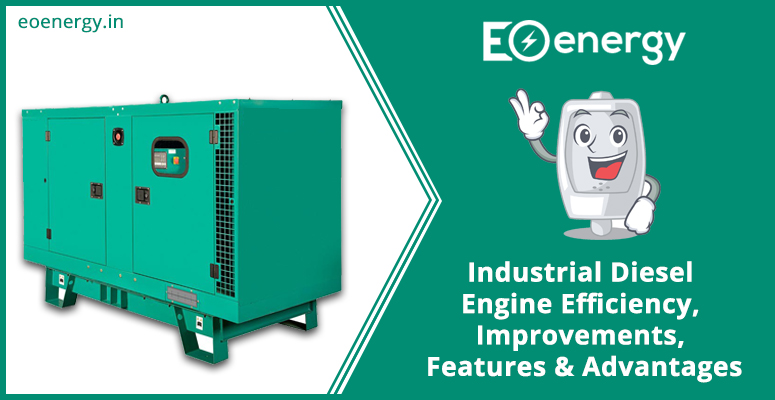 A diesel engine was invented in 1892, by Mr. Rudolf Diesel. Based on his invention, this engine got his name.

What is Diesel Engine

Diesel engines are a compression ignition engine or we can say this engine is a type of internal combustion engine. The fuel of the diesel engine ignited and exposed suddenly. This process will generate high temperature and pressure of compressed gas, which maintains the efficiency of diesel engines.

In our alternative energy source, Maybe the traditional diesel generators do not fit into our definition. But this power backup generator is still a great addition to the remote power or grid backup system.

We have been using industrial diesel engine generators as power generation equipment in the oil and gas industry, for more than a century. The reason for success is because of its internal combustion solution. This will help to increase diesel engine efficiency and decrease fuel consumption.

Because of this valuable feature, diesel generators are still a prime choice of customers after it’s noise pollution.

The recommendation of diesel generators, because of its low maintenance cost and longevity. After 1950, the Environmental Protection Agency or EPA has improvised emission standards for diesel generators to control pollutants which prepares plans to improve and implement air quality by decreasing harmful and injurious emissions. The modern diesel engine generators are different as compared to the previous version, because of it’s low noise pollution and lower operating cost.flone

The internal combustion diesel engine ignites nuclear fuel through injection into a combustion chamber. The compressed air in the cylinder is at an elevated temperature so that instantaneous combustion occurs without the need for a spark ignition source.

Fuel prices per kW produced with diesel engines are much lower than those of other engine fuel types. With its high energy density, fuel consumption is low. The result is that diesel engines have fuel efficiency that is normally 30 to 50% lower than gas units.

From the start of their industrial use, diesel engines have continuously made a great improvement in its features. They also overcome their earlier disadvantages like noise pollution and operating cost.

If the diesel engine is so efficient, why it is not the first choice for everyone?

Day by day, the improvement of diesel engines has set a new example. But the natural gas or propane fuel engines, allow them to compete with diesel for use in rugged and remote services.

The cost of diesel fuel and availability is also one major factor. Because compared to diesel fuel, natural gas is less expensive.

The storage, transportation, fuel spills possibility, and the risk of unavailability is also a few major factors that affect relying on diesel. The diesel engine lifespan and the noise factor makes them impractical in some environments. For example hospitals, libraries, and other populated areas.

List of the sites that use diesel engines generator for power backup.

Apart from that, few other sites or manufacturing units use industrial power backup in their workplace.