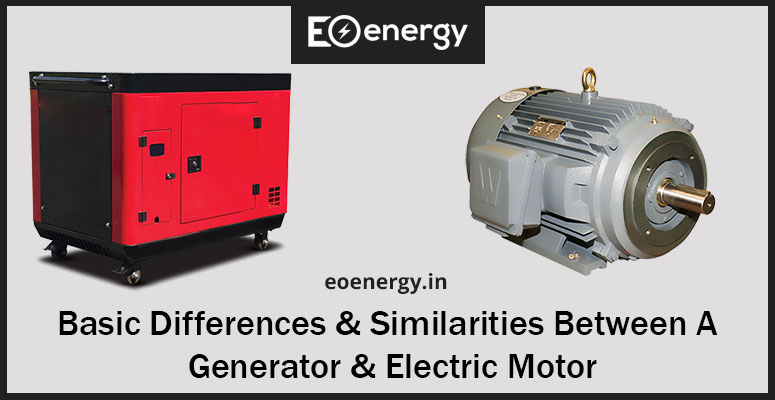 They both follow the fleming’s rule at the time of operation. A generator & the electric motor both are differentiated on various factors such as the main working principle of motor & Genset.

The electric motor basically an electric device that works on the law of electricity & magnetism. An electric motor mainly contains the object like stator, rotor, shaft, commutator, and brushes. Apart from that, a generator uses to produce electricity & converts mechanical energy into electrical energy. Mostly all the required hardware is the same, but the working principle is quite different.

An electric motor works when the power is on and brushes supply the current to the commutator. When the current pass through the commutator from the coil which placed between the magnets. The poles of the stator present with a magnetic field. When the current moves around the coil, the process will start. Because of the characteristic of the magnet, the poles retreat from each other and vice versa the poles are attracted. When the rotor rotates, the corresponding shaft rotates and converts the electrical energy into mechanical energy.

An electric motor offering the number of benefits during the operation. Some of the best benefits of this device,

Electric motors contain few moving parts and have a good operating life span. For example, a properly maintained electric motor can provide up to 35,000 hours of service without any interruption.

Clean energy is the best feature of the electric motor which makes them a more reliable & ecofriendly product. This device does not emit harmful gases which affect badly to human health.

Electric motors are highly effective and efficient with ratings. And it depends on the size and the operating conditions of the motor. Electric motors have a wide and durable operating life. It requires minimum service requirements.

A generator provides continuous prime power in the sector where you can face frequent power cuts. Also, the various range of power backup is useful for the home and industrial power backup. Other best benefits of the electric generator,

Continous prime power is beneficial to run your business continuously. This can result in a significant loss for businesses. Electric generators work as an alternative power source, and they protect the goods during the power outage.

In many situations, electricity is really important for convenience as well as for safety purposes also. Keep some spaces for well-lighten during power outages. it will prevent people to get injured themselves in the dark.

The efficient energy of the portable generator offering a long duration service at a very low price. Also, the low fuel consumption of the electric power generator helps you save more amount of money during the operation.

Similarities and differences between electric motors and generators

Differences between motor an electric generator

Rule’s that follows in an Electric Moter or a Generator

Major similarities between motor and generator