Main Components Of Generator And Its Functions 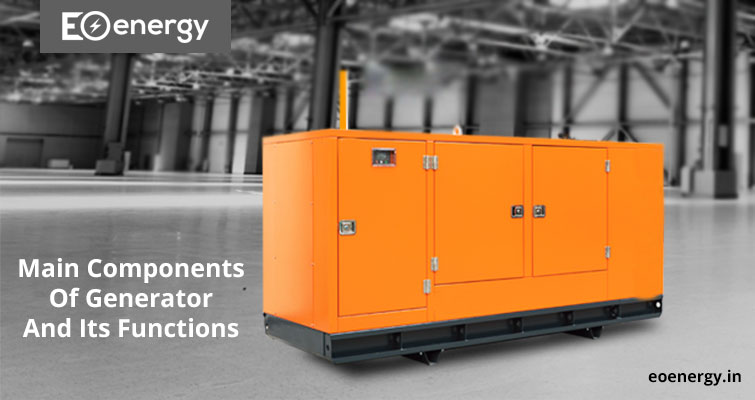 A generator is a machine that converts mechanical energy into electricity. It is essentially widely used for power generator sources. In other words, a generator is a source of electricity that works on fuel sources, such as petrol oil, gasoline, wind or moving through the water pressure. Generator serves as a high backup power source for factories, companies, and hospitals. The use of a generator is commonly for homes and small businesses.

How does a generator work?

An electric generator is a device, that converts mechanical energy into electrical energy as the output. This mechanism can be understood by the characteristic of the generator it is to be similar to a water pump. That creates a flow of water but does not actually ‘create’ the water flowing through it.

The modern generator works smarter than other old Version of the generator.  And the law of electromagnetic electricity discovered by Michael Faraday in 1831-32. Faraday notices the flow of supply in electric current can induce. And increase by moving an electrical conductor, such as a wire that contains electric charges, in a magnetic field. This movement creates a voltage difference between the two endpoints of the wire. Which turned into the electric charges that flow, thus to create generating an electric current.

General Components of a Generator

The main components of a generator are generally classified as the illustration above. How is the generator work? Control panels that contain various indicators and meters to provide easy and safe usage during the various operation sets. That satisfies all the needs and designs in accordance with the requests of customers. After all the statistical and measurements, working modes. Warning and situations reports for generator sets can be easily tracked by panels.

We have a few lists of generator components that use to implement and design for a generator. Here the list of main parts of a diesel generator.

The main components of the generator include the engine which provides power to the machine. Engines sizes match the power capacity of the standby for a generator. It has a larger capacity means it requires more power to turn the generator which produces electricity. Engines range from two to eight cylinders. An engine provides an accurate speed setting and arranges it in order, mount to the fuel pump, etc.

In the leading alternator brands of technology. It has high quality, productivity and durability are being used in all alternators component. Which is passed from the necessary test process and found appropriate, have a bearing system that does not need maintenance. Control specific and a microprocessor for working of engine and alternate or group is clearly.

The fuel tank could be the main component and necessary part of a generator. The fuel tank sometimes has the decent capability to stay the generator operational for six to eight hours. Within the case of tiny generator units, for industrial applications. It requires to erect an associate in Nursing to install an external fuel tank. All such connections are subject to the approval of the town coming up with Division.

Transformer: As the name suggests, this element regulates the output of the voltage generator. The mechanism is delineated below against every element that performs a district within the cyclic method of voltage regulation.

Voltage and Regulator: The transformer takes up a little portion of the generator’s output of the Alternativ Current (AC). After that convert it into Direct current (DC). Then feeds this DC current to a group of secondary windings within the mechanical device, referred to as exciter windings. Finally, regulate the electric current.

Rotating Rectifiers: These rectify the AC current generated by the exciter windings and convert it to DC current. This DC current is fed to the coil to make an associate in the nursing electromagnetic field. Additionally to the rotating flux of the coil.

Cooling and exhaust system:  For cooling and exhaust system components. That constant usage of the generator causes its various elements to get heats up. It requires to have a cooling and air-conditioning system. To remove heat generated in the process. Raw and freshwater are sometimes helping to utilize as a coolant for generators. Although these are mostly limited to specific situations. Example:- Small generators in city applications as well as large units over 2250 KW.

Hydrogen:  A hydrogen is sometimes working better as a coolant for the stator windings of large generator units. Since it is more useful at absorbing heat than other coolants. Hydrogen extracts the heat from the engine of the generator. Transfers it with the help of a heat exchanger to a secondary cooling circuit. After that contains de-mineralized as coolant water. This is why very large generators and small power plants often have large cooling towers tanks for all types of uses. A standard radiator and fan are mounted on the generator and works as the primary cooling system.

The control panel mostly stands for the interface of the generator and it contains provisions for electrical outlets and controls. This is an important part of the component of a generator. Different manufacturers have various features that offer a control panel and their units. Following are the list of these:-

Different gauges indicate critical parameters such as oil pressure. Moreover, the heats of the coolant, battery voltage, engine rotation speed, and duration of the operation. Consistent measurement and monitoring of the parameters gauges are enabled. And built-in shut down of the generator when any of these cross their own threshold levels.

b) Electric start and shut down

The gauges control panel also has meters for the range of the output current and voltage and operating frequency.

As the generator includes moving parts in its engine. It requires to lubricate to ensure durability and continuous operations for a sustained period of time. The engine of a generator is lubricated by oil stored in a pump. You should check the level of lubricating oil every 8 to 10  hours of generator operation. You should also check of leakage and leakages of lubricants. And you can change the lubricating oil every 500 hours of generator operation.

All the generators are usable in transportable or stationary. It has custom-built and installation that offer organic base support. And that assembly frame conjointly permits for the generated securely. Use a frame generator to create internal and external frames assemblies for the machines. The following commands are located in assembly.

To manufacture a tank, it is essential to have the process of shearing, bending, and welding. It’s producing it is only closed when the leak testing is completed. In order to make sure that there isn’t any leakage. The metal sheet that is used is currently recognized as zinc and it’s surface covered by a layer of pure zinc. That gives the product a higher durability and corrosion resistance. Usually, these tanks have the shape of a parallelepiped.

Short Note On The Main Types of Generator

There are mainly two types of generators.

An asynchronous generator is also known as an induction generator. It is a type of Alternating Current (AC) electrical generator. Which principally works for similar working for an induction motor to produce power. Asynchronous generators are operated by mechanically turning their rotors faster than synchronous speed. That is generally very useful in applications such as mini-hydro power plants, wind turbines. Or is also used in reducing high-pressure gas streams to lower pressure.

The Generator components can be classified into 11 great categories with respect to their development and locations. It is important to understand that a generator does not actually create electrical source energy. Remain, it uses the mechanical energy supplied to it to force and the movement.