Working of Generator & How they Generate Electricity? 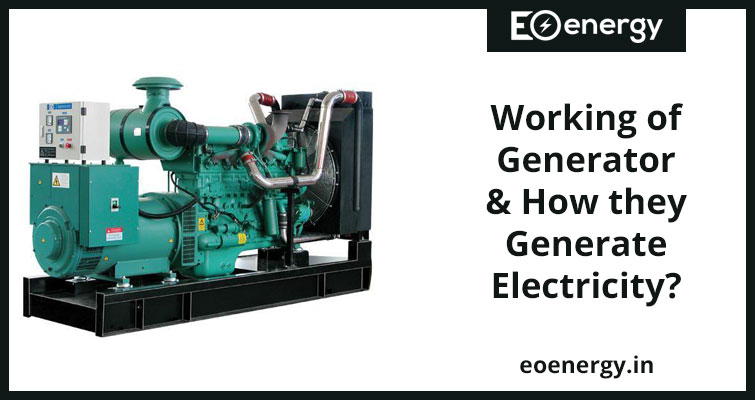 This is a useful appliance that supplies electricity when the electricity went and prevents discontinuity or disruption of business operations.

A portable generator is available in the market with different electrical and physical configurations for different uses. Some generator is small in size and portable. That is used for providing small amounts of power for a few devices. Furthermore, some generators required permanent installation for the entire house and industrial purpose.

Did you know what is the first electromagnetic Generator? The Faraday disk is the first generator. And it has been invented in 1831 in British. And the inventor of this is Michael Faraday.

Once the electricity generates. It directly supplies through the copper wires to the external devices or External machines.

Mainly, a generator is an electrical motor work in reverse conservation. A motor and a generator have many similarities.

When we provide electricity in a motor then what happens it start rotating. As well it’s reversed when you rotate a motor at a defined speed. With the help of external energy like steam, coal, gas, oil, etc, it starts generating electricity.

Today’s generators working are based on the principle of electromagnetic induction which is discovered by Michael Faraday in 1831.

In the simple word and most basic, an electrical generator is nothing more than an electromagnet. Means moving wire near a magnet to cut the magnetic field. And to direct the flow of electrons in the form of electricity. It’s similar to like a motor pump, how a pump pushes water through a pipeline.

The faradays law says that when a conductor places in the different magnetic fields (N, S), the EMF is induced. And this induced EMF is equal to the rate of change of flux linkages. Due to this, the EMF will be converted. When there is either a relative space or a relative time variation between the conductor and the magnetic field (N, S).

There are two types of generators: –

Direct current is the current that cannot change its value according to the time. Its value will be fixed and all the electronic devices or components are work on DC.

Alternative current is the current that changes its value according to time. Its value will be varying and all the electrical components or devices are work on the AC. Sometimes also we felt why an electrical generator won’t produce electricity. To rectify this issue you need to check & follow some important instructions.

Let us connect the slip ring with both ends of the loop conductor. We can also connect a load with the loop conductor through the brushes rest on the slip rings as shown in the figure. In this case, the alternating electricity converted in the loop comes the load. This is an example of an AC electric generator. This is the main concept of the working of a portable generator for home.

We can also collect the electricity converted in the rotating loop conductor through commutator and brush arrangement as shown in the picture. In this case, the electricity convert in the loop (here the rotating loop of the single conductor loop generator can also be referred to as the armature) gets rectified through the commutator and the load gets a DC current. This is the basic concept of a DC generator.

In this article, we discuss how electricity generates with the help of a generator. We also discussed the AC and DC Generators. One intrusting thing, that energy can neither be created and nor be destroyed. It only converts from one form of energy to another form of energy.

I hope you understand how electricity will be converted or generated with the help of the generator. If you have any queries, comment below in the comment section.